The Mystery League came to an end with the publishing of #30, Death Points a Finger by Will Levinrew. However, the next title had already been announced to be Death Holds the Key by David Frome. 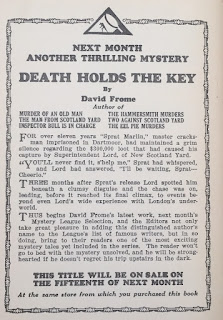 I obtained a copy, published by Grosset and Dunlap under the title Scotland Yard Can Wait! So let's call this an "honorary" Mystery League title. Let's take a look at it. 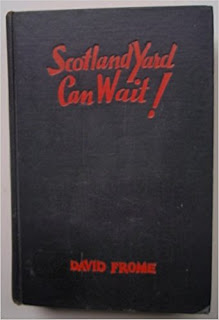 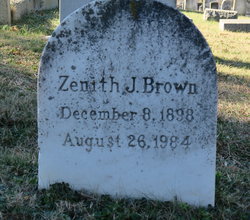 Eleven years ago, Sprat Marlin was sent to Dartmoor prison for a theft of
£60,000 from the Lombard Street Branch bank, which was never recovered. It was suspected to be an inside job. Now he is released, and Inspector Lord has been waiting. A long time. Marlin is immediately put under surveillance, and is believed communicating with someone through the 1930's version of the text message: a line in the Personals column of the newspaper.

Sprat eludes the watchers. Jerry Drake, junior attorney for Attorney Ernest Prothero, notices a curious little man (Sprat) engage a taxi and give an address of 10, Barkston Mews, which is a property up for sale by his office. Suspicious, he follows him, then finds him dead inside the house, pausing to take a key found beside the body. The killer takes the body away and dumps it in the river.

Drake is sent to see a client, Sir John Bailey. Drake is astounded to see that James Oliphant, the butler, is a man he saw meeting with Sprat earlier. Soon everyone is after Drake's key, which must unlock the hiding place of the loot.

My first novel by David Frome/Leslie Ford, and an enjoyable one. The writer's characters are fully developed, and fun to follow. We are treated to Jerry Drake's and Inspector Lord's thought processes throughout as they seek to unravel a complex mystery. Ex-actress Cissie Gay, the girlfriend of Sprat Marlin, is an especially enjoyable character as she becomes increasingly independent and assertive following his death. She puts her theatre background to work, and is at times a barfly, a spy, and an investigator herself.

The writing style reminds of Manning Coles, in which trivial side events are related in great detail and become hilarity; such as when housekeeper Mrs. Rodgers offers Sutton and Franklin some of her homemade cake; which seems to have a reputation as they attempt to sneak out and toss it in the bushes without her seeing.

Note that there also appears to be an "Americanized" version of this title published which has British slang “translated”, pounds translated to dollars, etc. The originally planned title, "Death Holds the Key", would have been a better fit as the entire story revolves around the search for the elusive key.
Posted by Rick Mills at 7:38 AM