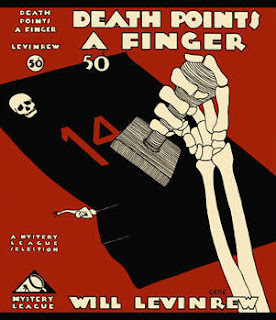 About this selection: This is the last of the 30 titles published by The Mystery League. It contains a promo for the next planned title, Death Holds the Key by David Frome; however, the League did not survive to publish it. The story was picked up by Grosset and Dunlap and published under the title Scotland Yard Can Wait!

About the author: The Encyclopedia of Science Fiction states: Pseudonym of US author William Levine (1881-?   ), who seems to have been active in the late 1920s and 1930s, publishing several crime novels during this period, usually featuring the deductive exploits of the elderly Professor Herman Brierly. Seemingly unnatural events and murders are usually brought back to the mundane by the professor. He also authored For Sale - Murder in the Mystery League series.

A group of war veterans has an annual reunion at a remote lakeside camp. When the war first ended, they entered into a Tontine investment plan - which provides annuities to members, and the last survivor gets everything left. Over the years, as each member passed away, the survivors get an anonymous note just signed "14", signifying another group that betrayed them during the war. It seems that "14" is doing away with them one by one.

As the annual reunion begins, only 11 members arrive. News comes that three of their group - Morris Miller, August Schurman, and Wrigley, have just died. The "14" message arrives soon after.

Jimmy Hale, star reporter for the New York Eagle, had been assigned to cover the reunion. He travels to his friend Professor Herman Brierly's nearby camp, and from there they attend the reunion at Higginbotham's camp. As news of the three deaths arrives, Hale and Brierly begin the investigation to see who "14" is, and if the deaths are related. Professor Brierly uses scientific methods to find clues to the case.

The opening chapter provides a thorough insight into the hectic operations of a big city newspaper, with the chaos peaking as deadline approaches; then all activity abruptly ceasing as the building vibrates with the starting of the presses in the basement. (A scene recently replicated in the 2017 Steven Spielberg movie, The Post.)

An enjoyable mystery. Professor Brierly is a Sherlock Holmes type of investigator who uses scientific analysis to find astounding clues (examining a rope, he determines it came from a farm which has a boxwood hedge, pear trees, two horses - one bay, one sorrell - leghorn chickens, and a collie. However, unlike Sherlock, he leaves us to wonder just how he made those determinations.

The investigation grinds along, and just when they close in on the suspect, we expect a neat wrapup, but suddenly the killer is shown to be someone we did not expect - and technically in violation of fair play with the reader.

Email ThisBlogThis!Share to TwitterShare to FacebookShare to Pinterest
Labels: Levinrew; Will