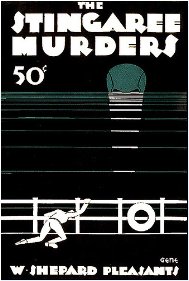 About the author: This is evidently his only novel. In Biographical Sketches of Cartoonists & Illustrators in the Swann Collection by Sara Duke, it is noted that he and John Churchill Chase created a comic strip series on New Orleans history in the 1940's.

Thirteen people are aboard the houseboat Terrapin, guests of publisher Leonard Reade. They set out into a remote region of the Gulf on a fishing expedition. One the guests, Louisiana Governor Pierre Lacroix, shows a threatening letter he has received from "The Stingaree Gang", rumored to be drug smugglers. Lacroix has written a secret plan to round them up. Lacroix sets off from the houseboat in a small skiff to fish, and is later found dead, stabbed, with a barb from a stingaree (stingray) in the wound. Then the boat's motor is disabled, and they are marooned in the marshes. Boatman Si Ling volunteers to row to the mainland for help - and he, too, is found dead in his skiff. Two more murders will follow before the murderer is found.

This is a nice tight little mystery, well constructed, especially in Chapter One as the characters are introduced, and in the take-a-breather-and-review-the-suspects (Ch. 12). Th spectacle of the passengers, none of which trust each other trying to stay on deck all night to keep an eye on each other reminds of the famous can't-fall-asleep scene in Treasure of the Sierra Madre.

That's the good part. The bad part is the continual distraction by cringe-worthy items such as:
Also see this review by TomCat, a.k.a. Last Century Detective, who sums it up this way: "I found this an interesting curio with a fresh look on an old theme and plenty of good ideas, but its unashamed airing of 1930's racial opinion makes this a problematic book to recommend to a modern audience. If you can put it down as a product of its time and think you have come across every trick in the book than you simply have to pick this one up."