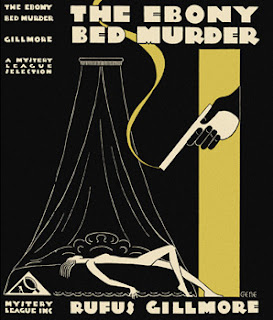 About this selection: This book contained a sealed section to isolate a portion of text in virgin condition until  the reader broke the seal, which J F Norris notes was a gimmick copied from Harper (see his Pretty Sinister Books blog for photos of the seal). The rear portion of the seal contained a promo for Spider House, the next title in the series. In my copy, only a small, jagged portion of the seal page remains bound between 158/159.

This is the first selection to indicate New York and London as their publishing site, both on the front papers and the dust jacket.

About the author: The Golden Age of Detection web site notes: Gillmore, Rufus (1879-1935) was an American mystery writer. The author of four mysteries, Gillmore's books often reflect those of better-known writers. The Alster Case (1914) is virtually a parody of Anna Katherine Green's famous The Leavenworth Case (1878), mixing comedy and chills. The Ebony Bed Murder (1932) echoes the then-popular works of S.S. Van Dine. Gillmore has always been an obscure mystery writer. There is no evidence that such famous mystery historians as S.S. Van Dine, Howard Haycraft or Anthony Boucher had ever heard of him, or read his books. Gillmore was the first husband of writer Inez Haynes Gillmore Irwin.

Principal characters:
The six people present at the time of the murder:
The five ex-husbands, and #6 in waiting, in order (detailed beginning p. 126):

Griffin Scott, amateur criminologist, is summoned from his home to scene of Helen Brill Kent's murder. Kent was an actress and society climber, leaving behind a trail of five ex-husbands. She is found shot in her apartment (map on page 41) on her elaborately carved ebony bed. Six others (listed above) had gathered in the apartment to celebrate her birthday. 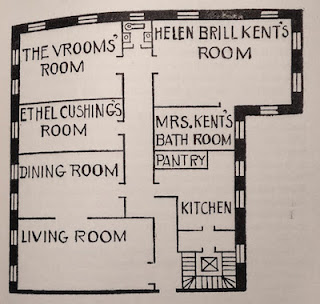 The family insists it is suicide, but Griffin Scott and D.A. Randolph Hutchinson claim it is murder. A search of the room turns up one curious object: a long, rolled up piece of twine with a shoehorn tied to one end. Someone pulls the electrical fuses, and when they get the lights back on, the twine is gone.

Further developments: Her jewels turn up missing (oxymoron?). Later, Detective Haff calls from the apartment with the news that he knows who the killer/thief is. Before Scott and Hutchinson can return, Haff himself is killed.

As others have noted, dilettante Griffin Scott is a kindler, gentler version of Philo Vance (from the S. S. Van Dine novels of the same period), minus the snobby condescension; making him a lot more likable. Scott's batcave-like apartment contains all the latest anti-crime tech gadgets (chem lab, workshop, grand piano) as well as a giant chessboard painted on the floor (guess he didn't worry about the security deposit).

Lots of sixes: Six people present at the murder, Five ex-husbands with a sixth in the pipeline, six keys to the apartment. A floor plan of the apartment is provided (p. 41) which is helpful, but darned if I can find the rear entrance, which plays an important role, indicated on it.