The House of Terror by Edward Woodward (1930)

About the author: Not much is known about Edward Woodward. The frontispiece of this book lists three of his other novels: The Pigeon Wins, The Gamblers, and Black Sheep. Note that both Goodreads and Google confuse him with the English actor by the same name (born 1930, obviously not this author) and attribute various other works (incorrectly) to him.
Major Characters:


Locale: Cleeson, Yorkshire; on the moors of England; and the mountains of Spain

Synopsis: Dr. Cuthbery Merrivale picks up wandering George Fenchurch one night on the moors, and treats him for an ankle injury. Fenchurch is an artist who has come to paint scenes of old Cleeson Manor. However, it turns out the owner, Rupert Dykeminster, has gated off public access to the Manor grounds and set vicious dogs loose inside the gates. Fenchuch is determined to access the grounds. About the same time, Rupert is found dead from a poisonous blow dart, and the dogs found dead also. Fenchurch, being on the scene, is the obvious suspect but willingly provides evidence it was not he.

Alicia Dykeminster is the sole heir to the estate (along with a list of strange conditions), and moves in to Cleeson Manor with her friend Veronica Starling despite various warnings. The manor holds a secret that many people want. A campaign to scare them away fails, but winds up with Veronica being kidnapped and carried off to the mountains of Spain.
Review: Most of the story occurs around Cleeson Manor, with the last third or so taking place in the mountains of Spain. The Cleeson Manor section is great fun with all the usual country house tropes tossed in: we have a menacing hunchback, poison darts being shot about (one used to hold a warning note), underground tunnels, watchers in hollow trees, sliding panels in the woodwork, and plenty of secret passages.
The Spanish section has more adventure, and is reminiscent of a Manning Coles. Lots of chases, skulking about, car crashes, and narrow escapes. An especially fun episode is when Fenchurch is hiding in a room above a bar, peeking through a hole to watch the rogues below just as they discover an enemy (Fleeson) is in their midst in disguise - and all hell breaks loose.
Throughout the book a secondary mystery is the identity of Fenchurch and Fleeson - the reader will first believe they are good guys, then bad guys, and so forth. Their true identities are tightly held until the final chapter, a surprise on both counts. Two dashing mysterious heroes and two lovely young ladies in the mix - you can see where this is going, and it is great going.
Posted by Rick Mills at 4:27 PM No comments: 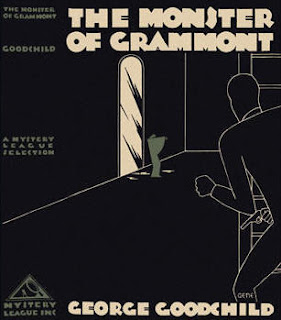 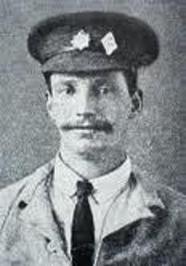 About the author: Here is a Wikipedia article and a Goodreads article about George Goodchild (1888-1969).

Synopsis: Ralph Wallace and Connie Conrad are touring France and encounter Monsieur Fallières and his daughter Yolande, who own the massive Château Grammont; where Connie was billeted during the war.

It turns out the château is also home of a 'monster' who appears periodically, breaking mirrors, and is suspected in the death of a servant a year ago. Monsieur Fallières goes missing, then is found murdered, soom the servant Monsieur Severin is murdered also.

Meanwhile, young Ralph Wallace is attracted to Yolande, while Connie is interested in parlour maid Bertha - who has a couple of seedy associates, Heinrich and Niels, whom she secretly allows access to the house. Both they - and the 'monster' - are after something, but what?

Posted by Rick Mills at 9:54 AM No comments: 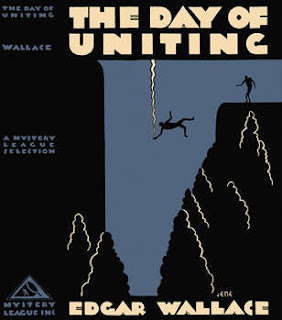 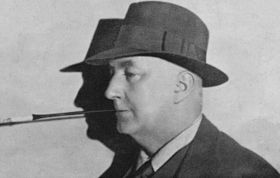 Posted by Rick Mills at 3:23 PM No comments: