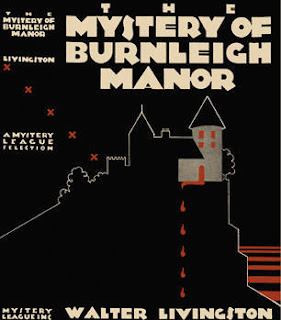 About this edition: Published in 1930. A preview chapter of #6 - The Invisible Host by Gwen Bristow and Bruce Manning is included in the back of the book.

About the author: Walter Livingston is also the author of The Mystery of Villa Sineste, #19 in the Mystery League series.

Timeline: A bit confusing but this seems to be the background:

Hmmm... well, it's not a murder mystery. No one gets murdered.

The story focuses on Burnleigh Manor, now a rundown boarded-up relic, along with the Lodge, a smaller well-kept residence at the gate on the same grounds. The Manor was the property of the eldest brother, Edward, until his death; when it passed to Cecil. The youngest brother, Robert, had run off with Edward's wife (Lady Burnleigh), both without a trace. Five years later, Edward dies by his own hand on Christmas Eve. The story begins sixteen years later.

Cecil, now owner of Burnleigh Manor, contracts with an American architect, -- Riker, to examine the manor and plan for its restoration. There are reports of intruders in the boarded-up Manor, with footprints found inside and some items missing.

Cecil and Riker arrive at the Manor. Riker is attracted to Emily Lowry, but she is aloof; yet constantly attracted to the Manor. As Riker begins his inspection,  he deals with trouble-making intruders who thoughtfully leave him little treatening notes (Phantom of the Opera style) and disappear down secret passages. The questions are:

Please see this review by Bev Hankins on her blog, My Reader's Block.