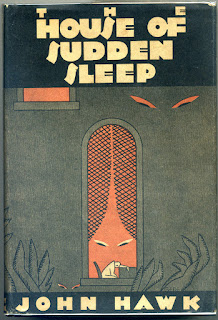 
About this edition: Two preview chapters of #4 - Jack O'Lantern by George Goodchild are included in the back of the book.

About the author: John Hawk is a pseudonym of Helen Cournos, who also wrote under the name Sybil Norton. I couldn't learn much about her beyond this Wikipedia article about her husband John. As John Hawk, she also authored The Lone Lodge Mystery, The Serpent-Headed Stick, The Mid-Ocean Tragedy, The Titanic Hotel Mystery, It Was Locked, and The Murder of the Mystery-Writer.

Synopsis: David Ribbelsdale is found dead at his desk in his home office, with no obvious cause of death - he seems to just fallen asleep and never woken up. Assistant DA Rodney Colt is asked to come in. It is not obvious if the death is by natural cause, suicide, or murder. There are rumors of infidelity. In his desk are found love letters from an unknown "Cynthia".

Rodney Colt finds everyone in the Ribbelsdale household seems to have secrets, and enlists the help of sexy, flirtatious Félicité Monot to keep her eye on them. Cynthia is found to be a Cynthia Stoddard but little is known about her.

Edith Ribbelsdale dies in the same manner as her son, David.

Peter Wilder dies the same manner, just after writing a letter accusing someone of being the murderer.